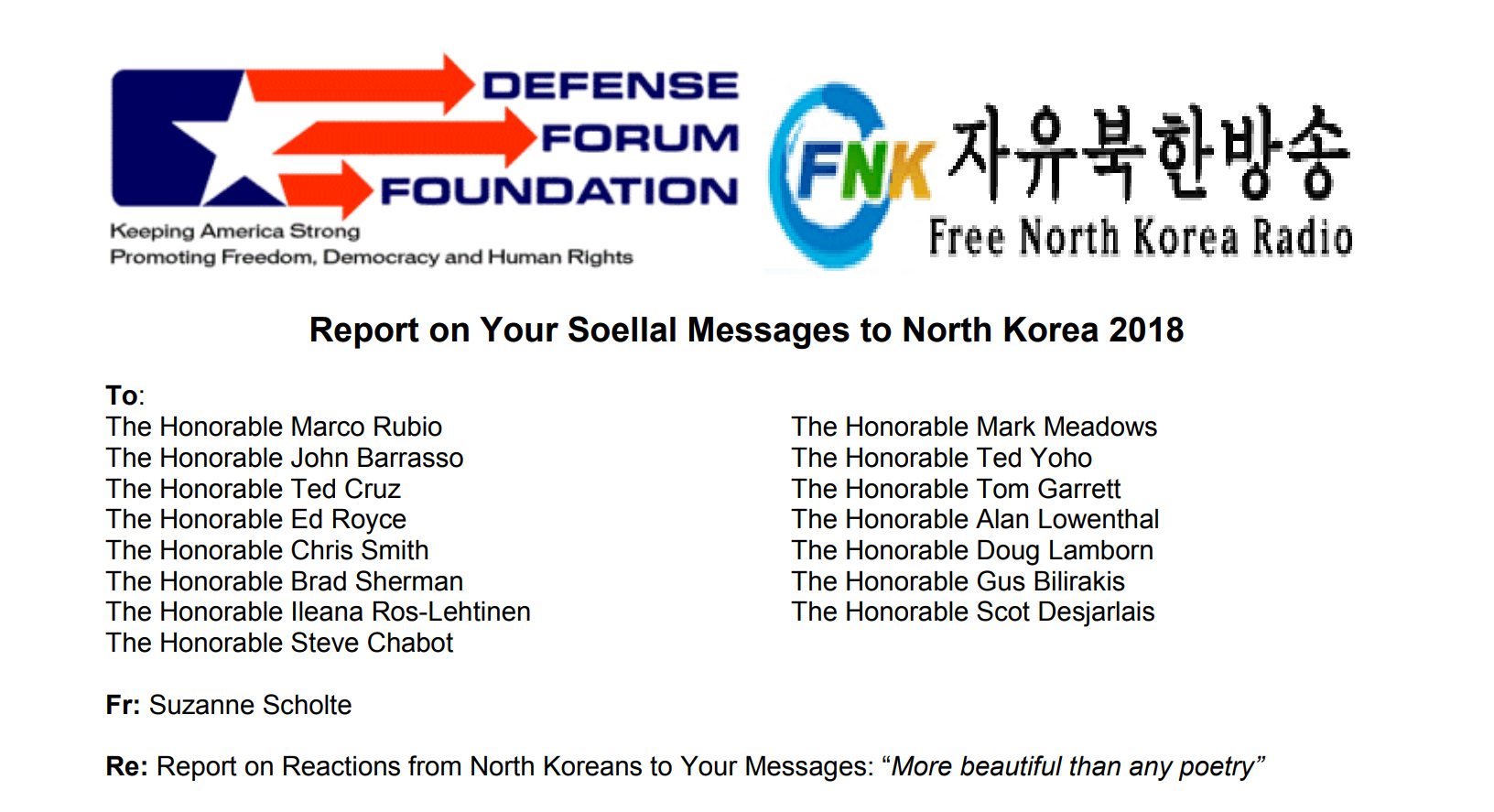 We can never thank you enough for the wonderful messages you sent for us to broadcast on Free North Korea Radio to North Korea this month for the Seollal (Korean New Year) holiday which started on February 16th this year. This program has become increasingly popular in North Korea, but also increasingly important in communicating the truth to the people of North Korea: that Americans care deeply for them and are not the “Yankee Imperialist wolves” who occupy South Korea and not the source of their suffering. These Seollal messages reveal the truth through your words, and we are pleased to report back to you the responses from both the staff of Free North Korea Radio but also people in North Korea who responded. We also got very favorable feedback from South Koreans who heard about the program.

Here is the report from the Free North Korea Radio staff:

According to the FNKR Staff, “Their messages resonated among the people inside and outside North Korea, and also in South Korea, as media there reported “these messages show the perfect examples of what South Korean Assemblymen should learn.”

North Korean listeners said: “every year in this season we listen closely to the New Year’s messages from US Members of Congress”, and “there are people who are even looking forward to listening to these messages.”

A listener from Hyesan, a retired Korean Worker’s Party official, said, “they were more beautiful than any poetry, any phrase and any love in the world,” and “please give my thanks to the US Members of Congress for not forgetting North Koreans who are under the brutal oppression of Kim Jong-un by sending these messages every year.”

One of the FNKR listeners in Sinuiju, a teacher named Kim said “these days I often turn the channel to tune in to interesting radio programs from RFA and other stations broadcasting from South Korea, then I found out about this program from FNKR which aired the messages from American politicians congratulating us for the New Year. I could see how well FNKR has been recognized in the world.”

FNKR staff reported: “In general, the North Korean listeners and sources in North Korea for FNKR are thrilled to hear from Americans, especially US politicians sending the messages every New Year, explaining their thoughts on North Korea and showing their love and encouragement to the North Korean people. Those who hear these radio messages, then spread their words to the people around them.”

The staff of FNKR also sent their thanks to all the Members of Congress for participating in the Seollal broadcast and said they looked forward to hearing more heartfelt messages from US politicians for the coming holidays.

The FNKR program got attention in the South Korean media as well. The Chosun Daily, the most popular newspaper in South Korea, covered the messages from Members of Congress on their website:

and New Daily also reported about the fact that the US politicians sent the messages to North Korean people including photos of each Member of Congress:

South Koreans who read these articles responded positively saying “this is exactly what South Korean politicians should learn and follow”, and “when the South Korean government is all for inviting Kim Yo-jong and other North Korean high ranking officials, it is so meaningful that American politicians announce that ‘our concern is for the people of North Korea’ through the Free North Korea Radio broadcast to North Korea.”

ALL messages that were broadcast to North Korea can be seen at www.defenseforumfoundation.org.