–Sept 22, 2014: Save North Korean Refugees Day 2014. Thank you to all those who joined us at the U.S. State Department in Chinatown, Washington, D.C. to highlight the increasingly horrific situation North Koreans face in their attempt to escape to freedom in South Korea and other countries. To read the Report click here. For the Press Release, click here.

–March 25, 2014:  A special thank you to Governor Kim Moon Soo of the Gyeonggi Province, South Korea for visiting the Coalition during our meeting on Mar 25, 2014. He gave us inspiring words regarding the importance of continuing to work for human rights in North Korea, citing his own experience as a prisoner when he was a young student activist.

–February 2013:  Read New Year messages from members of Congress which were broadcast into North Korea through Free North Korea Radio in Feb 2013.

–March 20, 2012: Events to Save North Korean Refugees, including weblinks to media news coverage of events. Click here to read the report. View letters delivered to Pres. Obama, Pres. Lee, Pres. Hu Jintao, and Ban Ki Moon.  Symbolic Coffin Outside the White House. Dramatic plea to President Obama on the eve of his trip to Korea to intervene with President Hu to save North Korean Refugees.(Press Release)

–September 22, 2011: International Protest to Save North Korean Refugees held on Sept 22, 2011. Activities occurred in 13 countries and 24 cities! To download the flyer, click here.  For more info, to download documents, and to read Congressional Testimonies from September 20, click here. 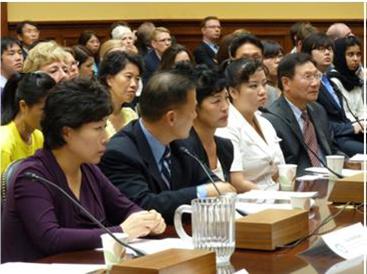 –June 10, 2010: Victims of Communism Memorial Foundation’s Third Annual Commemoration. We joined Dr. Lee Edwards and the representatives of many nations to remember the 100 million victims of communism by laying a wreath on behalf of the people of North Korea at the Victims of Communism Memorial Foundation’s third annual commemoration.  While there were countries represented like the Czech Republic and Poland that are now free, we must remember and fight to help those people who still live under this tyranny. As we laid the wreath for the North Korean people to remember those millions killed by Kim Il Song and Kim Jong-il, we wore yellow and blue ribbons for the South Koreans and the Japanese who have been abducted by this regime and a black ribbon for the South Korean sailors, among the most recent victims of Kim’s tyranny. (View Foundation’s website)

–April 2010: To read about our 7th Annual North Korea Freedom Week.  (View Report & Acknowledgements) This was the first year to hold NKFW in Seoul, South Korea.

–March 30, 2010: Protest at the Chinese Embassy to Save North Korean Refugees (3505 International Place, N.W. Washington, D.C. 20008.), led by the Pyongyang Musical Group to protest against China’s violent treatment of North Korean refugees.  The Pyongyang Musical Group is a visiting group of North Korean defectors who have been performing in the USA at churches to raise awareness of the North Korean human rights issues. Most of them escaped to freedom through China and they want to continue to raise awareness of the suffering that refugees undergo especially female refugees.