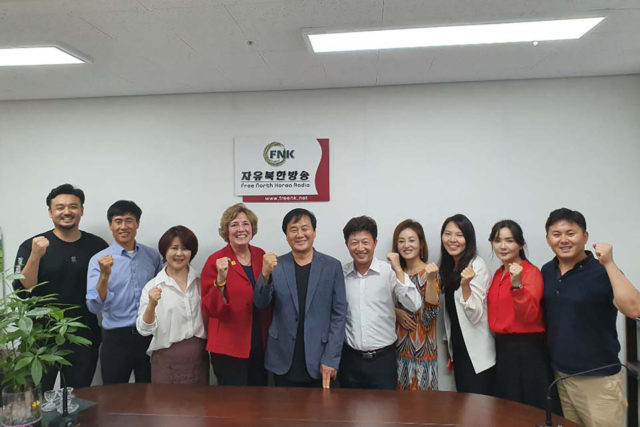 Lee Park escaped from North Korea in 2004 but she knows pretty much what her parents were doing when NBA legend Dennis Rodman hung out with Kim Jong Un for a wild night of “hotties and vodka” in 2013.

“They were doing the same thing they do every day, like everyone else in North Korea,” said Park, 39, who landed in New York City in 2006 and now lives near Washington DC. “They don’t know any different. They’re all indoctrinated from birth.”

Her parents start their day in Chongjin by bowing to photographs of Kim’s father and grandfather, who founded North Korea in 1948, on their living room wall. Everyone is required to hang them in their home.

“You have to wipe down the pictures every day in case the police come,” Park told the Post. “When they do, they check to make sure the pictures aren’t dirty.”

Once a week, in the early evening, Park’s parents, brother and the majority of North Korea’s 24 million citizens from 8 to 80 meet for “self-criticism classes” where they’re forced to report on themselves and each other for various infractions.

“You have to confess your sins first and then the sins of others,” Park said. “It’s awful. There’s no freedom there, no humanity. They’re taught to worship Kim Jong Un. We are also all taught to hate Americans. My parents could never conceive of Kim partying with an American basketball star.”

To help the people left behind, Park and other North Korean defectors are big supporters of the US-funded, Seoul-based Free North Korea Radio that began the year Park escaped and which broadcasts news of the outside world every day and night without fail into the Hermit Kingdom.

The broadcast is needed more than ever, says Suzanne Scholte, the American founding co-chair of Free North Korea Radio and president of the Washington DC Defense Forum Foundation.

“North Korea is the worst human rights atrocity happening in the world today,” Scholte told the Post. “The country would empty out in two weeks if people knew the truth about the outside world and realized how much they were needlessly suffering. We try to reach them with news and information every day.”

The Seoul broadcasts are powerful enough to reach throughout the country. They’re directed by Kim Seong Min, 57, a former North Korean Army captain and military propagandist, who escaped from North Korea in 1996 only to be captured and escape again by jumping off a moving train. He made it to South Korea in 2000 after hiding out in China for three years.

Kim Seong was inspired to flee after he picked up an illegal radio on one of his patrols and began listening to broadcasts from Seoul. The program he tuned into dispelled the key myth about North Korea, that its founder Kim Jong II, was born on sacred Mt. Paekdu. In fact, Seong Kim learned from the broadcast, he was born in the Soviet Union.

Kim Seong works with a team of other defectors at the radio station and is one of the few to use his real name. The rest fear for the safety of their families back in North Korea so use aliases. Kim Seong also has a network of informants within North Korea who both send him information and also distribute material for him at great risk.

“Most people are so brainwashed in North Korea that they don’t even know they’re brainwashed,” Kim Seong said in a Skype interview from Seoul. “They are psychological slaves of Kim Jong Un.”

There’s no data available to show how many North Koreans — who have no Internet — can actually get the Free North Korea radio programs but many buy cheap Chinese shortwave radios on the black market that can pick up the transmission from Seoul.

It’s dangerous if you’re caught listening, however. Lee Park says her father is too scared to talk to her when she telephones home and her mother refuses to let her speak about anything controversial.

“North Korea has the three-generation rule if you get in trouble,” Park said. “They send three generations of a family to a prison camp even if only one of them was guilty of something.”

Some North Korean children, Scholte said, are born in prison camps and never leave. “It’s inhumane,” she said, “and we just hope that we’re part of someday stopping it.”

This article was originally published by the New York Post.